Falling for a Little Color

It was sunny here Friday, but I dithered all day about going out with the camera when I had so much to do on the computer and telephone. I finally went out at 4:00, driving on country highways until I found some small roads untrafficked enough that I could put on my flashers and step out of the car. I was hunting for roadside weeds, many of which are colorful this time of year but don’t get their share of attention. Alas, only one photo from that shoot (#4) made the final cut. I had better luck with hill- and roadside foliage found while scoping out my neighborhood on foot yesterday and the week before. 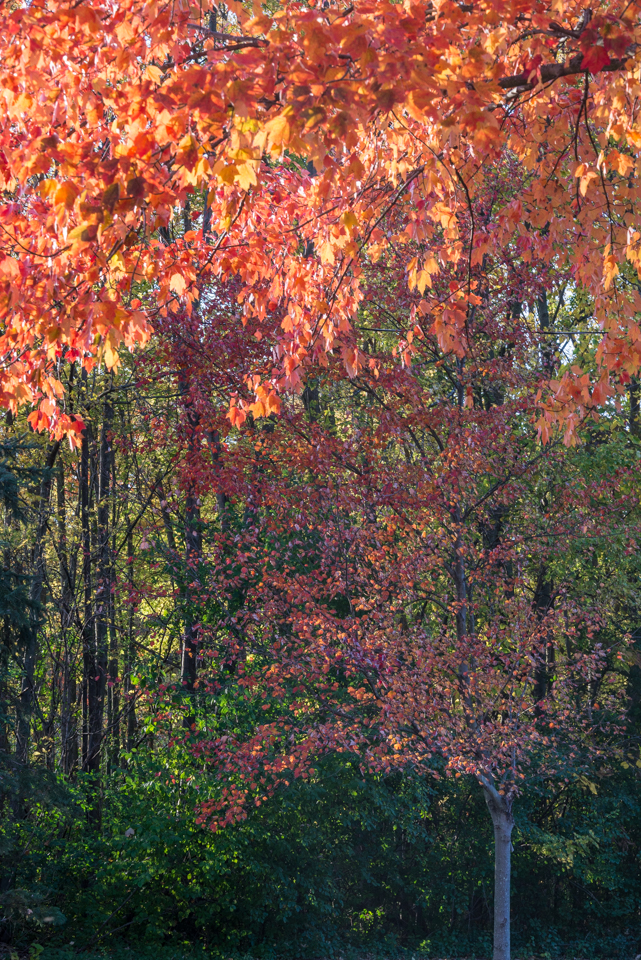 1 These Red Maple trees are at the entrance to our community.

2 Looking at trees yesterday, I had the same thought several times, “I wonder if this is what gave the pointelists their idea.” This photograph is a close crop of #1. 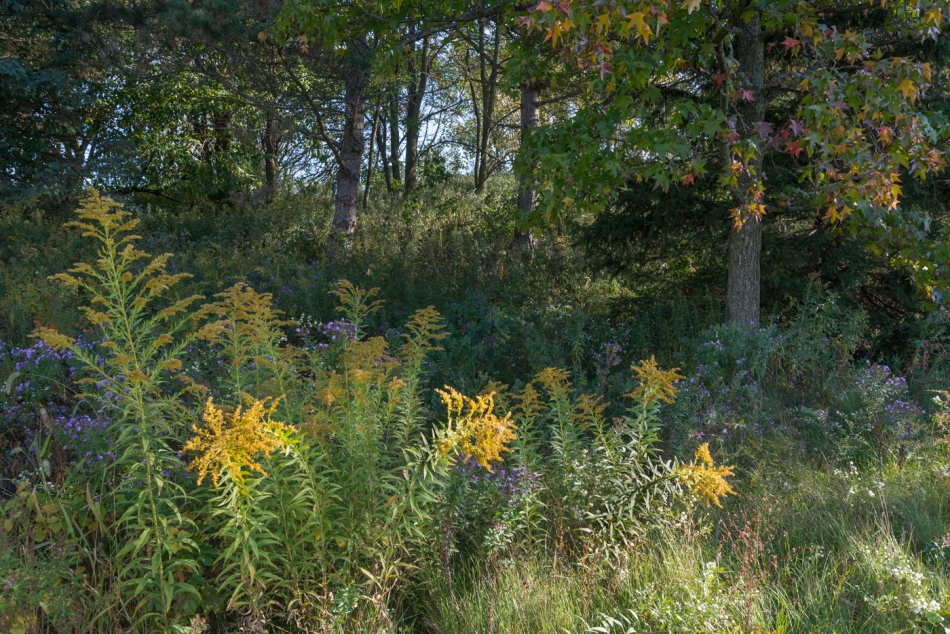 3 A few Goldenrods were still blooming on our Wildflower Hill. 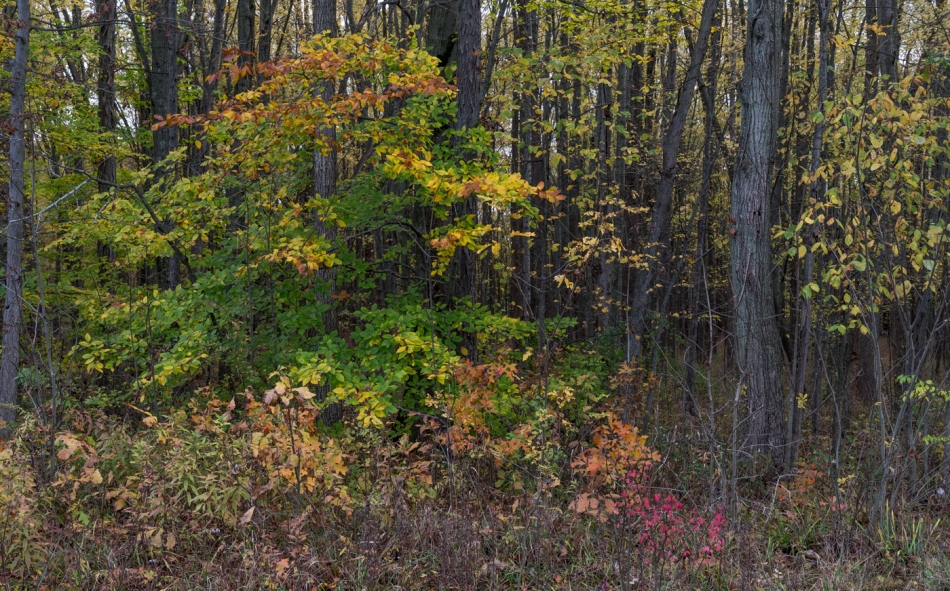 4 Even some greens seem to scream in the fall. 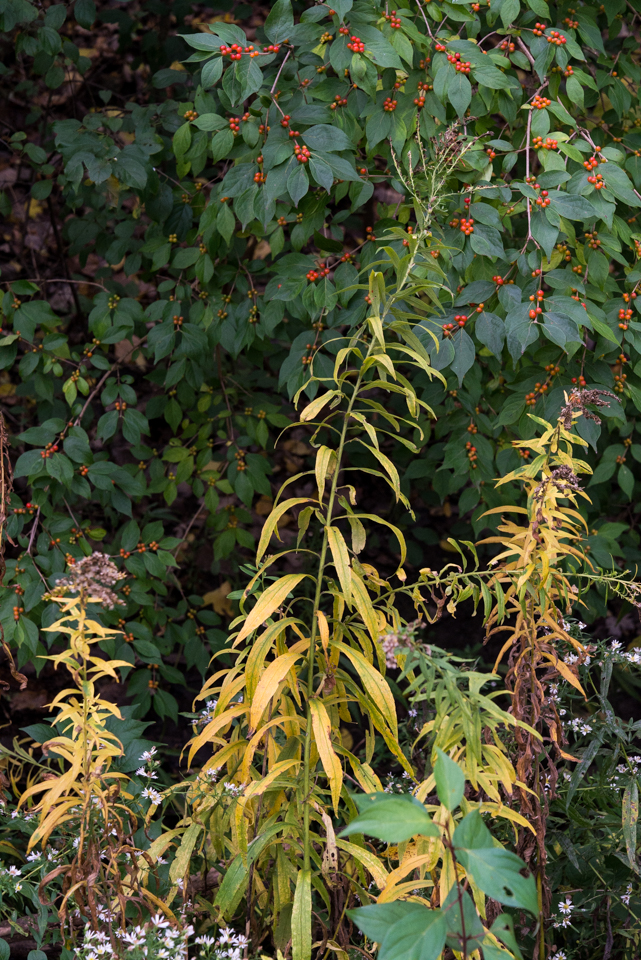 5 When the Goldenrod flower turns to seed, the leaves pick up the color. 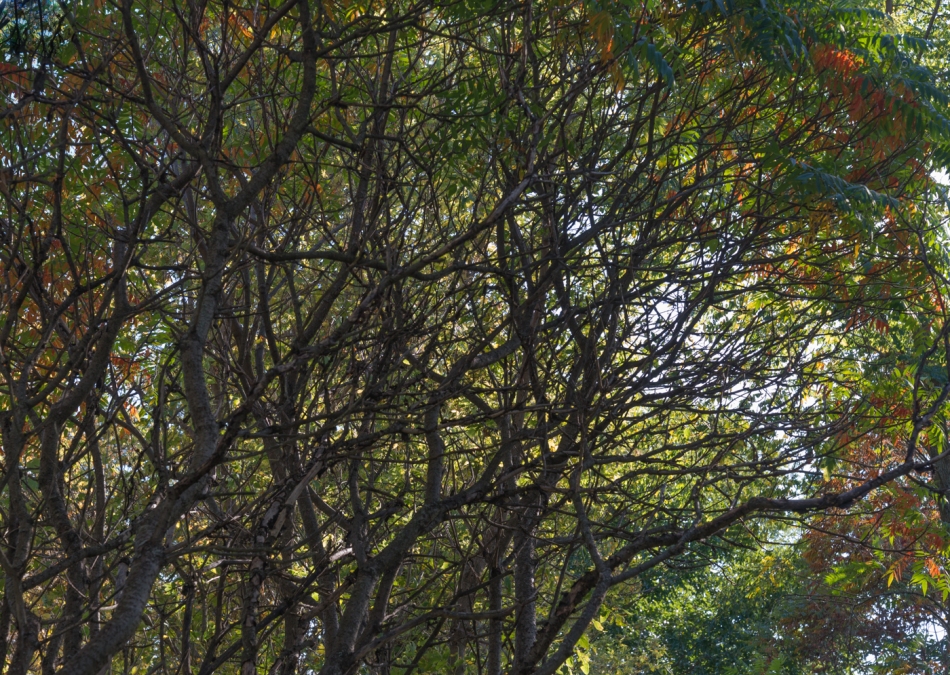 6 The Sumac on Wildflower Hill was beginning to show its color last week. 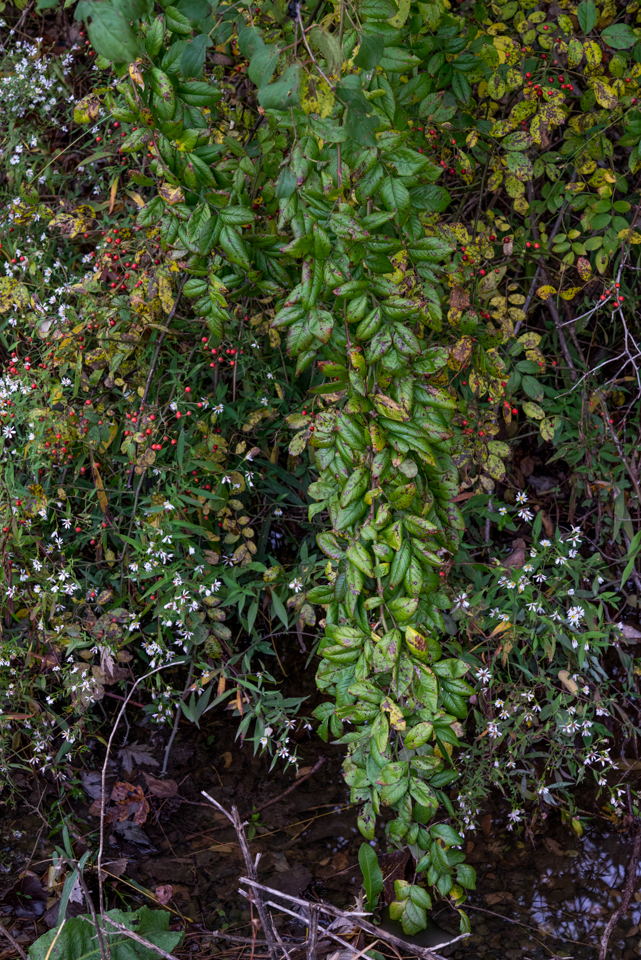 7 A branch of Mulitflora Rose hangs in front of its own rose hips and wild Asters beside our ring road.

8 The Mulberry is invading our campus, a branch of which hangs over purple-turning native Dogwoods. 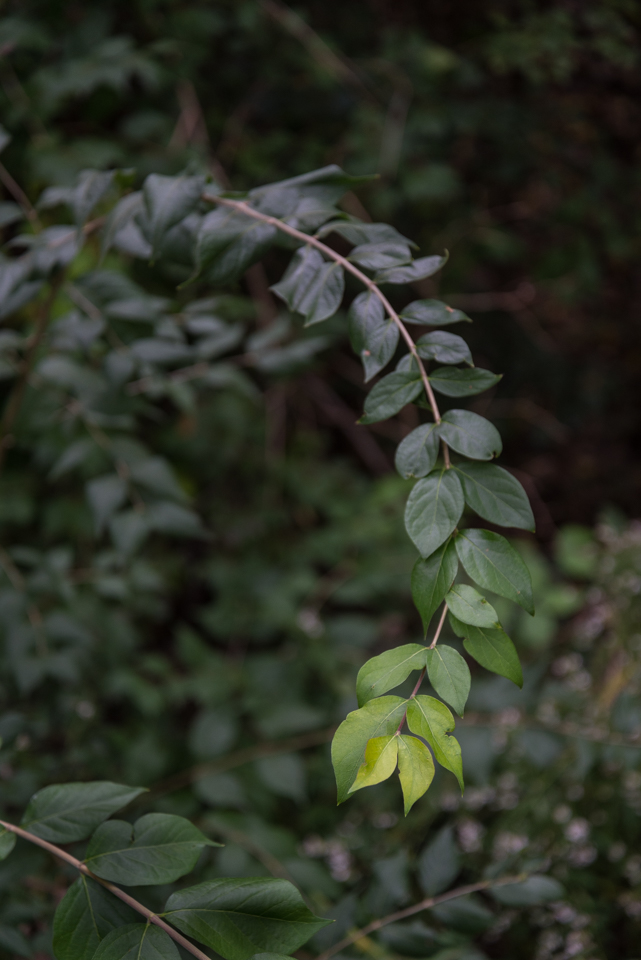 9 If this is an Asian Honeysuckle, as my resident botanist guesses from the scant information I bring him (Did it have any berries? Was it a schrub? Etc., etc.), then it’s another case of a bad (invasive) plant making a good (attractive) impression.

10 While I was walking around Green Pond last week, the sun struck this baby Ash tree. When I asked my husband for confirmation on the kind of tree it was (I was right), he also said something that I’d never heard before. Large Ash trees are a thing of the past, says David. This little Ash tree won’t grow up to be as big as its older relatives because the murderous Emerald Ash Borer will fell it before it gets the chance. It may, however, grow to a size too small to grow the tougher bark that the Emerald Ash Borer likes but still large enough to be reproductive. In this way, artificial selection may turn the ash tree into a dwarf species. This kind of evolutionary pressure—human driven this time—has already resulted in Swordfish becoming a smaller, yet still reproductive, fish due to overfishing of large Swordfish, he says. 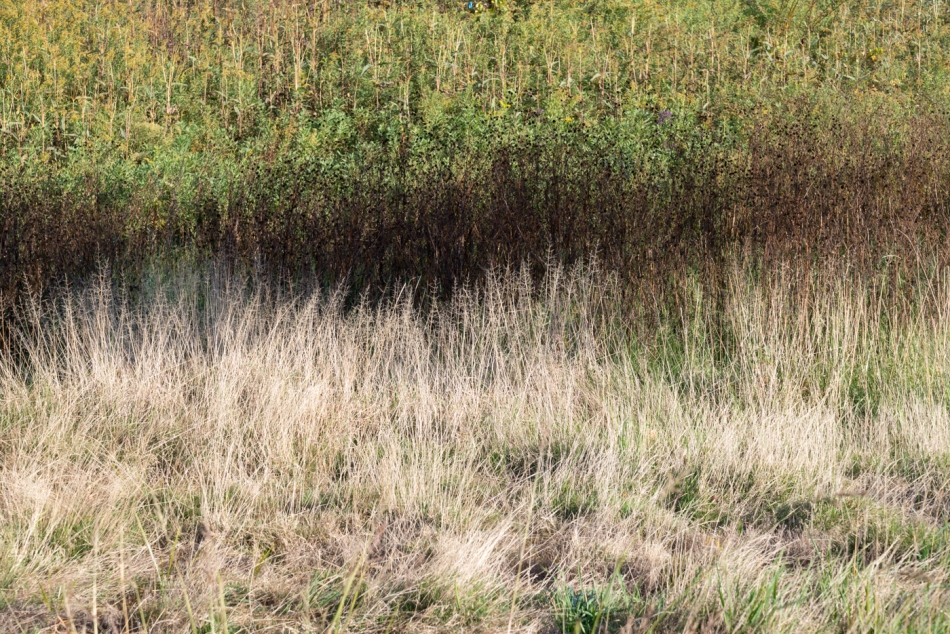 11 The dark streak in this photograph is what remains of the Begger’s Ticks I photographed in late August. See them in the last photograph in this post.

12 What I liked about the scene in the previous photograph was the contrast between the light-colored Grasses and the dark Beggar’s Ticks. Turning the photo black and white may show the contrast even more. 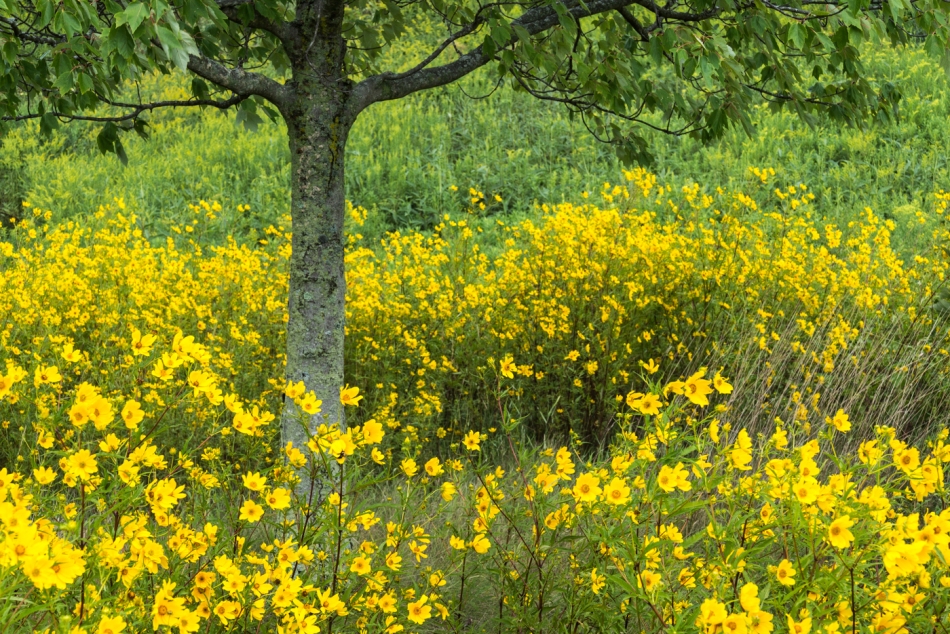 13 In late August and early September Beggar’s Ticks ran in profusion along Wildflower Hill for the length of two or three city blocks. They’ll be back next year, when many other things may be also. BTW, the Latin binomial for these Beggar’s Ticks is Bidens coronata. Really.

This entry was posted on October 25, 2020 by Linda Grashoff. It was filed under Leaves, Nature, Photography, Plants, Trees and was tagged with black and white, invasive plant, Kendal at Oberlin, Wildflower Hill.